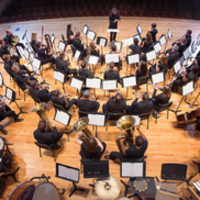 The WASBE Conference performance in Killarney was acclaimed as “Un tour de force enorme” (Miguel Etchegoncelay, Argentina), “ein Konzert der Superlative” (Peter Bucher, Switzerland) and as possessing “assertive musicality and powerful precision” by Chris Woodruff, USA. Also commenting was Timothy Reynish, World Association for Symphonic Bands and Ensembles, Past-President, who observed that Karel Husa’s “Cheetah … has to be played as brilliantly as this. Frederick Speck is a meticulous conductor, and the ensemble was on outstanding form, throwing Husa’s virtuosity off effortlessly… a concert which centered on the Grawemeyer composers Husa, Penderecki, Takemitsu and Joan Tower, and this was an intriguing, brilliantly played and conducted programme.”