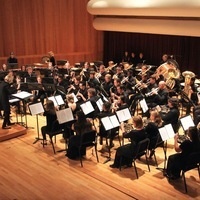 The University of Louisville Symphonic Band is comprised of approximately 60 undergraduate and graduate students from the university representing both music and non-music majors. Its mission is to perform core works of the standard concert band repertoire. The regular concert season includes two concerts a semester as well as special clinics with public school programs. Under the direction of Dr. Amy Acklin, the ensemble has also championed new music, premiering works of Kevin M. Walczyk and Paul Brink and collaborated with composers David Maslanka and Steve Rouse. The UofL Symphonic Band has recorded multiple works of Steve Rouse, available at manhattanbeachmusic.com.

Now in their eleventh season, the musicians of the Louisville Concert Band and Chamber Winds Louisville enjoy sharing their enthusiasm for the performance of wind repertoire in all of its dimensions. Concerts typically include chamber music, solos with the ensemble, and full-cast concert band works. The repertoire is diverse, spanning harmoniemusik to the most current new works, and often including at least one piece by a composer of whose contributions have a special place in the development of the wind band (Mennin, Creston, Persichetti, Grainger, Sousa, Fillmore, and others). The integration of full ensemble with chamber pieces brings great variety to the repertoire and keeps the listener engaged in the concert event. Frederick Speck, the director, is surrounded by ensemble members who are educators (both in music and other disciplines), professional musicians, and other excellent performers whose professions are in non-music fields. All are drawn together because of their appreciation for the fellowship of ensemble performance and the joy of sharing it with appreciative audiences. In addition to regular season concerts, the ensemble has performed at the 2011 Kentucky Music Educators Association Conference and the 2013 Midwest Clinic: An International Band and Orchestra Conference.