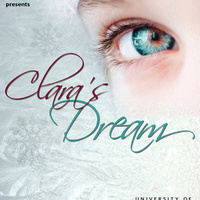 Our curtain opens with Clara watching the snow coming down and her dream begins with the Christmas Angels who bring news to the Sugar Plum Fairy of Clara’s impending arrival in the Kingdom of the Sweets. A decorated honor guard escorts Clara to her throne and a wonderful pageant is then put on in her honor. This pageant opens with the fiery Spanish Dance, and is soon followed by a vibrant Russian Dance, a bright Chinese Dance, a languorous Arabian Dance, Tchaikovsky’s brilliantly scored dance for the Merlitons, a playful candy cane dance for the Polichinelles, and the great sweeping “Waltz of the Flowers”. Finally, the Sugar Plum Fairy and her Cavalier dance in a grand pas de deux and the ballet is brought to a rousing conclusion by the famous finale. Each of the characters pay homage to Clara and she is presented with a magical Nutcracker as token of their love for her and their fondest hopes for her future and her destiny.