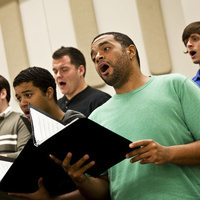 Singing Cardsmen is the premier men's chorus of the School the Music. The Cardsmen was established in 2015-2016 in efforts to extend the choral experiences to more students at the University of Louisville. This non-auditioned ensemble provides an opportunity for the men to act as ambassadors, representing students from all walks of life in the university.