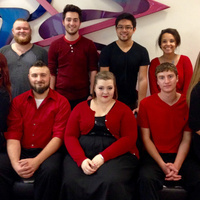 Cardinal Rule is a contemporary a cappella ensemble at the University of Louisville School of Music. The group performs music from various genres, eras and decades, including songs originally performed by Norah Jones, Michael Jackson, Jason Mraz, Death Cab for Cutie, and even the B52s. Most importantly, it is all done without the use of any instruments other than the human voice. Cardinal Rule was formed in January of 2014.