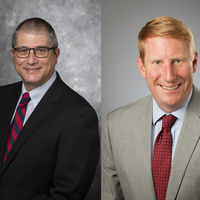 Two Economists Drink Their Way Through the Unfree World

Co-authors of the recently published book, Socialism Sucks: Two Economists Drink Their Way Through the Unfree World, Benjamin Powell and Robert Lawson will recount their travels through socialist countries, discussing what they found and why bad beer is only the beginning of the problems with socialist governments.

Robert Lawson is the Jerome M. Fullinwider Centennial Chair in Economic Freedom and director of the O'Neil Center for Global Markets and Freedom at the Southern Methodist University (SMU) Cox School of Business. He is the co-author of the widely-cited Economic Freedom of the World annual reports, which present an economic freedom index for more than 150 countries. Lawson has numerous professional publications in journals, including Public Choice, Journal of Economic Behavior and Organization, Cato Journal, Kyklos, Journal of Labor Research, and more. His research has been cited more than 8,000 times, according to Google Scholar. Lawson is past-president of the Association of Private Enterprise Education, a senior fellow at the Fraser Institute, and a member of the Mont Pelerin Society.

Ben Powell is director of the Free Market Institute at Texas Tech University, and a professor of Economics in the Rawls College of Business. He is the North American editor of the Review of Austrian Economics, past-president of the Association of Private Enterprise Education, and a senior fellow with the Independent Institute.  Powell is the author of Out of Poverty: Sweatshops in the Global Economy, and has authored more than 50 scholarly articles and policy studies. His primary fields of research are economic development, Austrian economics, and public choice. Powell's  research findings have been reported in more than 100 popular press outlets, including The Wall Street Journal and The New York Times. His writing has appeared in Investor's Business Daily, The Financial Times (London), The Christian Science Monitor, and many regional outlets. He has appeared on numerous radio and tv shows, including CNN, MSNBC, Showtime, CNBC, and Fox Business.

This event is part of the Center for Free Enterprise fall speaker series. It is free and open to the public. Free pizza will be served to attendees.

Great presentation, done with respect for opposing viewpoints, but clearly knowledgeable in their subject.