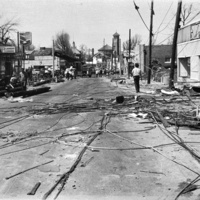 Tornado April 3, 1974: Then and Now photographs by Fred DiGiovanni

April 3, 1974 was a memorable day in the lives of many Louisvillians. Shortly after 4:00 PM an F4 tornado tracked through Louisville/Jefferson County causing devastation of which many had never seen. Fred DiGiovanni was a Junior High School art and photography teacher, living in the Highlands neighborhood when mayhem struck. Immediately after emerging from shelter in the basement of the apartment where he was living, DiGiovanni grabbed his Nikon 35mm camera, got on his bicycle and headed toward the Bardstown Road/Eastern Parkway corridor.

Forty years later, DiGiovanni revisited the same locations and 're-photographed' the original images with his medium format 6x6 Pentax. The result is the full-circle documentary art project represented in this exhibition.