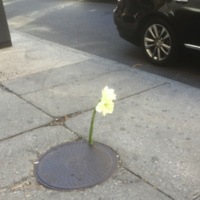 The Hite Art Institute is pleased to present Sislej Xhafa’s millimeter sentiments, the artist’s first U.S. solo exhibition, at the Cressman Center for Visual Arts. Born in Pejë, Kosova, Xhafa has spent much of his career exploring issues related to forced illegality, boundary transgression, and tension between authority and the demos.

Despite Xhafa’s work in these conflicted zones, his art is not about creating discord. Instead, Xhafa playfully reveals existing, if unspoken, tension, and gives that tension a safe space for (often humorous) expression. His work is never overtly political, nor is it particularly resolved to advocacy or partisanship. Xhafa does not take sides; he delights in the spaces between them. For his exhibition at the Cressman Center, Xhafa has produced a new installation work. Taking its inspiration from around the city of Louisville, millimeter sentiments celebrates material that subtly and sometimes heartbreakingly memorializes the city’s contributions to revolutionary ideas and practice, taking up the perspectives of those who benefited from such revolution as well as those who did not.

Xhafa’s work has been shown at the Italian Pavilion of the Venice Biennale, the Museum of Contemporary Art, Detroit, The Power Plant, Toronto, The Havana Biennial, and the Gwangju Biennale, among many other venues. He has received numerous public sculptural commissions, including the aforementioned Benvenuto (made in collaboration with Arte Continua’s Arte all’Arte in 2000); Hardau City Park Y, Zurich; Axis of Silence, Geneva; and most recently, Sweat Tree, first artwork installed at the Meta Sudans in front of the Colosseum, for the exhibition Par tibi, Roma, nihil, 2016. This past summer, Xhafa’s work was also featured in a solo exhibition at the Maxxi Museum in Rome.