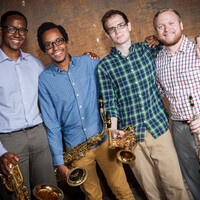 In collaboration with Naxos Records, the quartet recently completed the recording of their first album, which will feature the music of French composers Eugéne Bozza, Alfred Desenclos, Pierre Max Dubois, Jean Françaix, Gabriel Pierné, and Florent Schmitt.  The Album will be released towards the end of 2016.

As a recipient of Chamber Music America’s Classical Commissioning Program, the Kenari Quartet was awarded a generous grant that allowed them to commission a new work from Corey Dundee, the group’s very own tenor saxophonist.  This exciting project was made possible by the Andrew. W. Mellon Foundation, The Aaron Copland Fund for Music, and the Chamber Music America Endowment Fund.

Cost for Saxophone Sunday workshops and concerts is $50.