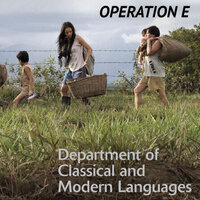 A controversial film in Colombia due to the real event on which it is based (the kidnapping of Clara Rojas and Ingrid Betancourt), Operation E was at risk of being banned but was finally released in the country after a politicized trial.
Crisanto (a magnificent Luis Tosar) is a poor cocaine farmer who lives with his family in the Guaviare jungle, a region ruled by the Fuerzas Armadas Revolucionarias de Colombia (FARC). A group of guerrilla fighters give them a moribund baby and tell them to take care of him. The doctors heal the baby, but believing he's been abandoned and abused, and they take it away.
Two years later, the guerrilla asks urgently for the child as he is at the center of an exchange of hostages, negotiated between the presidents of Colombia and Venezuela that is bringing both countries to the brink of war. This international political crisis has significant media impact and is widely reported across the globe. They give him three days to find the boy or he and his family will be killed. This is a political thriller which shows what happens away from the cameras and microphones, a contrasting view of the official version.
Spanish star Luis Tosar (Even the Rain, Cell 211) lived in the Colombian jungle in order to prepare for this role, based on the real man who was charged with Emmanuel, Clara Rojas' son.