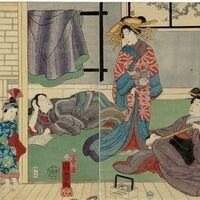 Ohashi Awakens in a Brothel: Talk by Sensei Amala Wrightson

2018 has been called "The Year of the Woman", yet there is still a dearth of women leaders in the 2,500 year old, male dominated tradition of Buddhism. Some Buddhist branches even insist that spiritual awakening, the pinnacle of human evolution, cannot be attained in the female form. History proves them wrong.

In her talk entitled "'Ohashi Awakens in a Brothel' and Other Stories of Zen Women", Sensei (meaning 'teacher') Amala Wrightson will share the stories of some of the unknown, unacknowledged female luminaries of the Zen Buddhist tradition. More importantly, she will reveal through these tales how men and women can realize (that is, make real and functioning) the awakened life here and now by practicing Zen. A question and answer session will follow the talk.

Sensei Amala Wrightson began Zen practice in 1982. She was ordained a Zen Buddhist priest in 1999 and has been teaching since 2004. She was sanctioned as a full Dharma heir of Roshi Bodhin Kjolhede, Abbot of the Rochester Zen Center, in 2012. Amala-sensei is a member of the American Zen Teachers' Association (AZTA).

This event is co-sponsored by UofL's Department of Philosophy and Louisville Zen Center. It will be held in the Elaine Chao Auditorium at UofL's Ekstrom Library.

Sensei Amala Wrightson will also conduct an Introduction to Zen Meditation workshop at Unity of Louisville on Saturday, October 20, and lead a Zen meditation retreat (with one-to-one, private instruction) at Heart of Perfect Wisdom Zendo on Sunday, October 21. Contact Louisville Zen Center for more information about these events, (502) 276-5738 or louisvillezen@gmail.com or visit http://www.louisvillezen.org/guest-teacher.html