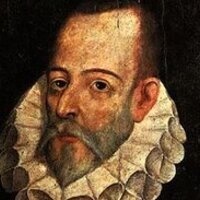 Faculty from the Conservatory of Castilla-La Mancha will present Sound Spaces for Cervantes, a cutting-edge performance in which Miguel de Cervantes's life and works interact with the sound and the space.

Sound Spaces for Cervantes was written as a tribute to Miguel de Cervantes, drawing a journey throughout his life and works where there is a connection between sound, visual, and spatial elements in a symbolic or factual way.

Each scene is related to a text and a country visited by Cervantes (Italy, Greece, Portugal and Spain). Each scene has its own independence regarding compositional elements (space, inner sound world, light design, instrumental forces, etc.), however, a common link is the sound of writing action–with the electronics–between all the compositions, as well as the initial impetus to compose each piece. The sound of writing is not only used as an element of cohesion, but also as row material throughout the sound abstraction of text passages selected for each work. Writing is also used as a visual element for anecdotal narration.

In this way, we obtain a rich and diverse sound world in which literature, visuals, sound, and scenic arts live together in the same performance.

Transitions between spaces and pieces are done by electroacoustic elaborations of the instrumental sonorities of the performed piece and the real sound of the writing action.

Miguel de Cervantes (1547-1616) was a Spanish writer who is widely regarded as the greatest writer in the Spanish language and one of the world’s pre-eminent novelists.

His major work, Don Quixote, considered to be the first modern novel, is a classic of Western literature, and is regarded amongst the best works of fiction ever written. His influence on the Spanish language has been so great that the language is often called la lengua de Cervantes (“the language of Cervantes”). He has also been dubbed El príncipe de los ingenios (“The Prince of Wits”).