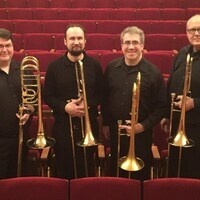 Formed in 2009, the Elysian Trombone Consort continues with its passion for trombone chamber music. The consort has performed recitals at the University of Louisville, Bellarmine University, the University of Cincinnati College-Conservatory of Music (CCM), University of Southern California, Mesa College (San Diego), the Peabody Institute of the Johns Hopkins University, Elizabethtown State Theatre (KY) and the historic Mt. Vernon United Methodist Church in Baltimore. They have also performed featured recitals at the 2016 American Trombone Workshop, multiple International Trombone Festivals (2019, 2018, 2013), and the 2012 College Music Society National Convention in San Diego.

Committed to the continued development of new repertoire for trombone ensemble, the Elysian Trombone Consort has premiered works by David Fetter, Rodney Oakes, Frank Gulino, and John Siler among numerous others. In addition, the quartet premiered works by David Faleris and Raymond Horton at the 2013 University of Louisville New Music Festival. The group has also premiered John Crouch’s Concerto for Four Trombones and Wind Ensemble with the Peabody Wind Ensemble in Baltimore and performed this concerto with the CCM Wind Ensemble. Upon hearing a recording of their performance of his Trombone Quartet, composer Walter Ross exclaimed, “WOW! What a super performance! I have never heard that piece done so well, with such energy, precision and spirit!”

Timothy Anderson is Associate Professor of Trombone at the University of Cincinnati College-Conservatory of Music. In addition, he serves as principal trombonist of the Dayton Philharmonic Orchestra. He also performs regularly with the Cincinnati and Columbus Symphony Orchestras and as a soloist and clinician.

Chad Arnow has been the bass trombonist of the Dayton Philharmonic Orchestra since 2000. He is a frequent performer with the Cincinnati Symphony and Pops and serves as the Assistant Professor of Trombone and Brass Area Coordinator at the University of Dayton. In addition, he has performed with the Columbus Symphony, Cincinnati Chamber Orchestra and the West Virginia Symphony.

Grammy Winner Brett Shuster is the Professor of Trombone at the University of Louisville and the interim second trombonist of the Louisville Orchestra. He has been a member of the Chestnut Brass Company and has performed with the San Diego Symphony, Phoenix Symphony, Vermont Symphony, Arizona Opera and Boston Philharmonic. He is the trombonist with the Louisville Brass.

Founding member Nathan Siler recently served as auxiliary second trombone of the Louisville Orchestra. He has served as principal trombone with the Orquestra de la SEC in Xalapa, Veracruz, Mexico and as a member of the Charlotte Symphony Orchestra. Additional appearances include the Cleveland Orchestra, San Diego Symphony, Baltimore Symphony, North Carolina Symphony, Louisville Orchestra and Tucson Symphony and Dayton Philharmonic. He has also performed with Randy Newman, Wayne Shorter and the American Brass Quintet.  He is the Associate Professor of Trombone at Eastern Kentucky University.

The Elysian Trombone Consort is always interested in performing opportunities, and especially in performing newly-composed works.  Please Contact Us for more information.