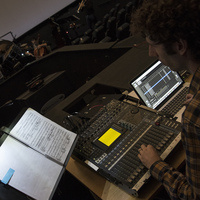 Ryan Ingebritsen is a composer, sound designer, sound artist, electronic musician, and sound engineer whose artistic activities spill over from one world to another. Through all of his artistic activities, he collaborates with musicians, dancers and live performers to create interactive and site specific solutions that enhance expressive possibilities of sound through modes of interaction and utilize spaces and sound systems as instruments in an ensemble. Ingebritsen has distinguished himself as an artistic partner in all of his collaborations and has become an integral part of the new music scene that has exploded in Chicago over the past 10 years. His work has taken him to Europe, Asia, and Australia and he has worked and had his work presented in premier venues throughout the US such as the Park Avenue Armory in New York and the J Pritzker Pavilion in Chicago working with groups such as eighth blackbird, International Contemporary Ensemble, Third Coast Percussion, and choreographers such as Erica Mott, Ginger Farley, and Sarah Shelton-Mann.