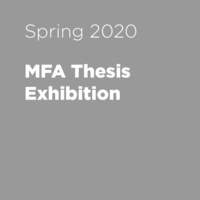 The Hite Art Institute is pleased to present our Spring 2020 MFA Thesis Exhibitions. Featuring the artwork of Shae Goodlett and Zed Saeed.

Invocation is a series of meditative line drawings that conjure an intangible presence by exercising the illusory characteristics of light and color interaction. Through a meditative and labor-intensive process, Goodlett attempts perfection, knowing that it cannot be reached. The images' interactions conjure phantom colors and optical effects which are not physically present, but nonetheless real and communally experienced. In this way, Goodlett’s work addresses issues of ritual, divinity, and perception.

Photography has historically borne the burden of being a mechanical art, where a button is pressed to make an image, seemingly requiring no skill. In an effort to create art, early photographers took their inspiration from the legacy of painting. They borrowed traditional subjects of classical artworks, intentionally created soft images, and even added brush strokes to imbue the idea of art into a photograph.

The movement of straight photography emerged during the modernist period, which began in the late 1920’s. Modernism was devoted to finding the essence of any medium. Straight photographers leveraged what they felt were the inherent properties of photography: the ability to produce clear, sharply-focused images, with a deep depth of field. They eschewed any self-conscious compositions or affectations. One of the earliest straight photographers of the modernist era was Eugene Atgét, who created over 10,000 views of Paris over 35 years with his large-format camera.

The tradition of American straight photography includes names like Walker Evans, Paul Strand, and Berenice Abbott. This period also defined the start of American photography with its concerns for local subject matter, and was done in a style that was direct, and much more unadorned than that of the avant-garde, which was the trend in Europe at the time. American straight photographers were captivated by the emerging urban settings of their country. Their focus was the human-made environment. Even the choice of subject matter—often the anonymous vernacular culture of everyday locations and places—was unembellished and appreciated for its simplicity and lack of prominence.

American Nocturne takes its cue from the legacy of American straight photography. It looks at the America of the here and now; locally, and in the present moment. Artists such as Edward Hopper—another modernist with a focus on America, and George Ault have captured the particular loneliness of the nocturnal American urban life. American Nocturne uses large-format film camera—a standard tool of the American straight photographers, and extends this heritage to the current moment.

Large format, despite its clarity and fidelity has an innate shallow depth of field, which softens the background in a photograph. In an attempt to mitigate this quality the final images for American Nocturneare the result of a composite of multiple photographs taken across various focal planes. The goal is not to draw attention to the technique but to extend the ability of the large-format medium to create images of unusual clarity and fidelity, all in an effort to render the made world in a new and enhanced manner.

American Nocturne was made possible through a generous grant by the Eastman Kodak Company.

Reservations are required to view the exhibition. Visit our website for information on making a reservation and to read our COVID-19 policies.