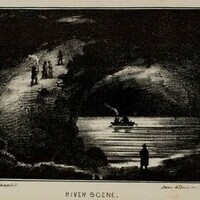 When Mammoth Cave opened to tourists in the 1840s, it generated a host of newspaper reports, guidebooks, poetry, and speculative fiction. Crucial to the cave's fame was the fact that the guides who led visitors through the cave were all enslaved men. This talk explores how the literature of Mammoth Cave consistently conflated the cave with its guides, and translated the cave's obscurity and mystery back into ideas of racial Blackness. At the same time, Cohen reads these white-authored texts as fraught co-creations, whose imaginative parameters were established by the guides' own productions of underground space.