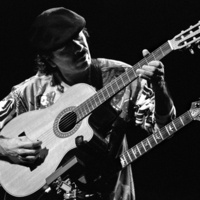 NOTE: This event has been canceled. For the latest information on the university's response to the COVID-19 situation, visit https://louisville.edu/campushealth/information/coronavirus.

University Libraries presents a new exhibition “Kings, Queens and War Games: The musical journey of the Lonesome Pine Special concert series through the photographs of Richard Bram, with multi-media by Richard Van Kleeck.” The show runs Jan. 26 - May 22 in the Photographic Archives gallery in Ekstrom Library.

The Lonesome Pine Special concert series ran in 1984 through 2000 at the Bomhard Theater in the Kentucky Center for the Arts. With a mission to be a musical "all things considered" platform for rising stars, underappreciated veterans and unique voices, it attracted numerous national acts such as Lyle Lovett, k.d. lang and They Might Be Giants.

The success of the concert series led to broadcasts on National Public Radio and PBS, airing in over one hundred and eighty markets and five countries.

The series was created and programmed by Van Kleeck, who then served as the director of programming for the Kentucky Center. The exhibition will feature more than 70 images by Bram, mostly in black and white.