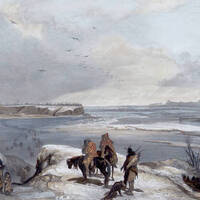 Kacy Hollenback on "We Once Were a Numerous People: Long-term Legacies of Smallpox and Cultural Survivance on the Northern North American Great Plains"

Contact between Old World and New World populations resulted in the exchange of ideas, technologies, and practices that dramatically changed world cultures. The Columbian Exchange also resulted in the spread of invasive species, including catastrophic Old World epidemic diseases like influenza, measles, and smallpox. The impacts on peoples in the Americas was disaster. In some areas fifty to eighty percent of the population died. Archaeology has contributed to our understanding of the spread of such epidemics. However, there has often been a focus on when and where disease outbreaks occurred and how many people were affected. Less attention has been given to what life was like for survivors. How did these individuals put their lives and societies back together after devastation?

Using theoretical assumptions from the anthropology of disaster and technology, the social impacts of smallpox on survivors can be explored. Such an approach is important, especially in areas with no written record. This presentation explores how the Hidatsa, a group of earthlodge villagers in North Dakota visited by Lewis and Clark and home of Sacajawea, responded to the smallpox epidemics of the 18th and 19th centuries. Specifically, how did individuals maintain or modify daily practice in light of these catastrophic events? This is an important topic to consider because the decisions and actions of those who endured these processes resulted in culture change and cultural survival for Native American Nations today.

We Once Were a Numerous People is part of an ongoing series of Lectures in Archaeology presented by the Kentucky Society of the Archaeological Institute of America in collaboration with the University of Louisville Departments of History and Anthropology. For more information about the series, visit http://www.kyarchaeology.com/.