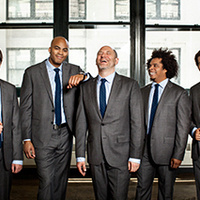 Through the commissioning of all-new works and the creation of immersive, live multi-media concert programs for the MAIN STAGE, METTA QUINTET is committed to challenging convention and expanding the boundaries of the live jazz experience.

In early 2012, the quintet, in partnership with the digital music distributor, The Orchard, released the globally-themed, Big Drum/Small World to unanimously positive reviews! The project features a diverse array of all-new music by renowned composers from eight different countries including Lionel Loueke, Miguel Zenon, Rudresh Mahanthappa, Yosvanny Terry, Omer Avital and Metta Quintet’s very own, Marcus Strickland. The project explores the globalization and ever-broadening definition and sound of jazz.