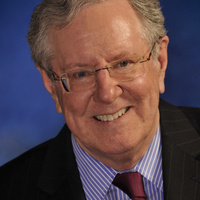 Join us for this unique opportunity to hear business and publishing icon Steve Forbes' insights on everything from cronyism and capitalism, to our nation's current economic situation.

Steve Forbes is Chairman and Editor-in-Chief of Forbes Media. The company’s flagship publication, Forbes, is the nation’s leading business magazine, with a circulation of more than 900,000. Forbes combined with Forbes Asia, Forbes Europe, and the company’s licensee editions together reach a worldwide audience of more than 5 million readers.

Forbes.com has become one of the world’s most influential websites, with more than 60 million unique visitors a month.

Mr. Forbes writes editorials for Forbes under the heading of “Fact and Comment.” A widely respected economic prognosticator, he is the only writer to have won the highly prestigious Crystal Owl Award four times. The prize was formerly given by U.S. Steel Corporation to the financial journalist whose economic forecasts for the coming year proved most accurate.

He has co-authored several books, including Freedom Manifesto: Why Free Markets are Moral and Big Government Isn't; How Capitalism Will Save Us: Why Free People and Free Markets Are the Best Answer in Today's Economy; and Power, Ambition, Glory: The Stunning Parallels Between Great Leaders of the Ancient World and Today.

This event is presented by the John H. Schnatter Center for Free Enterprise and is co-sponsored by the Young America's Foundation. Free pizza will be served following the talk.