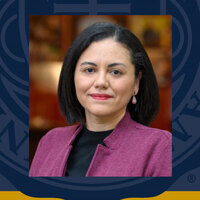 What: Hesburgh Lecture co-hosted by the University of Louisville and Notre Dame Club of Greater Louisville: Reducing Anti-Immigrant Sentiment and Increasing Demands for Justice in Mexico

Where: University of Louisville's Ekstrom Library, Room W104 (on the Speed Museum side of the Library, opposite the Starbucks and Circulation Desk), 2215 S 3rd St, Louisville, KY 40208. Parking is free at the Speed Garage or street parking near Speed, the UofL lot in between the School of Business and the School of Music, or the lot behind the Gheens Planetarium.

Lecture Description: The world faces a humanitarian crisis, partly driven by the thousands of undocumented migrants from Latin America and the Caribbean trying to reach the United States. In the past few years, immigrants have been stranded in the Southern border of Mexico, facing horrific violence, not only perpetrated by drug cartels but also by Mexican security forces. For human rights advocates, one of the most pressing challenges is how to improve citizens’ attitudes toward undocumented immigrants, and therefore increase solidarity and lower citizen support for state violence. Building on fieldwork research carried out at the Southern border of Mexico and quantitative evidence from original surveys, this project seeks to identify some of the effective strategies human rights advocates can adopt to bring about solidarity toward undocumented immigrants and increase citizens’ demands for justice to make state authorities accountable for human rights violations.

Co-hosted by the Department of Political Science and the Latin American and Latino Studies Program.