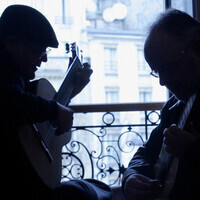 John McClellan and Kirk Hanser began performing together in 1996, each already being an established solo artist in his own right. As a duo, they quickly became known for their choice of entertaining programs, their technical and musical prowess, and their abilities for connecting with audiences. Over the past several years, they have become recognized by critics and audiences alike as one of the most enjoyable and highly respected chamber music groups in the U.S.

John McClellan’s playing has been described as “masterly...with a virtuous warm tone...fluid phrasing and a strong sense of rhythm” (The Brisbane Courier Mail, Brisbane, Australia). A master of many musical styles, John has been heard in concert and on recordings with Luciano Pavarotti, Vince Gill, Tim Thompson, Mark Knopfler (Dire Straits), to name a few. As a soloist, John has done major tours of the U.S. and Australia.

In addition to being a performer, John is the author of the fastest selling books in the history of Mel Bay Publications, Chet Atkins in Three Dimensions, Volumes 1 and 2. He recently released an exciting two-DVD set demonstrating the styles and music of Mr. Atkins, aptly titled Chet Licks (OTI Multimedia). Most recently, John’s publications, The Magnificent Guitar of Jorge Morel, and a third volume of his series of books on Chet Atkins were released to major sales and international acclaim. John serves as Professor of Guitar and the coordinator for guitar studies for Webster University in Webster Groves, Missouri, where the HMGD is ensemble-in-residence. John, his wife, Diane, and their four children live in O’Fallon, Missouri.

Kirk Hanser “is a superb guitarist...possessing an authentic musical personality” writes author and music critic Erik Eriksson (The DC Advocate). Kirk has performed throughout the U.S., Europe and Japan as soloist with orchestra, with various chamber groups and on solo guitar. He has appeared on numerous recordings with a wide range of artists and organizations, and is an author for Warner Brothers Publications and Mel Bay Publications with numerous books in print ranging in style from classical to jazz, rock to country. A session musician for many years and adept at working in various styles, Kirk is a “first-call guitarist” for various groups including the St. Louis Symphony Orchestra.

An award-winning teacher as well as performer, Kirk’s work with students has garnered several national awards including “National Teacher of the Year” and three-time “Outstanding National Program” for his work with the Childbloom Guitar Program of St. Louis (currently the largest such program in the U.S.). As the director of the St. Louis Academy for Guitar, Kirk offers classes in Audio Production, Jazz Improv, Music Theory and much more. Kirk also serves as Executive Director for the St. Louis Guitar Consortium, Inc., an organization which focuses on providing guitar-related opportunities (such as the Mid America Guitar Camps) for young musicians throughout the United States. Kirk resides in St. Louis with his four children.

The Hanser-McClellan Duo’s first feature CD, Jongo, featuring South American music from some of the region’s most famous composers, received awesome reviews both by music critics and by the public. Their next, La Vida Breve, includes exciting world premiere recordings - most of which were written for or dedicated to the HMGD - by such award-winning composers as Jorge Morel, Rico Stover and Jonas Mollberg.  Kirk and John are featured on 2012’s Slightly Above Below Average, at tribute to their mentor and friend, Chet Atkins, performing alongside such guitar luminaries as Mark Knopfler, Vince Gill, Tommy Emmanuel and many more.

Since 1996, the HMGD has performed throughout the U.S. for such diverse events as the Sheldon Classics Series (St.Louis, MO), the “Great Guitarists Series” in Austin, Texas, numerous guitar societies across the country including Austin, Dallas, Kansas City, St. Louis and San Francisco, the International Guitar Foundation of America Conference (1999 & again in 2005) and are standing, annual “special guests” at the Chet Atkins Appreciation Society Festival.  The upcoming season sees them performing in Paris, Frankfort, Bordeaux, Austin, Greensville (SC), Baltimore and venues in several other major cities.

The musical relationship between guitarists Erdong Li and Andrew Zohn began in 2013 as student and teacher. Li moved from his native China to pursue graduate studies under Dr. Zohn’s direction at the Schwob School of Music (Columbus State University). Upon Li’s joining the faculty of the Schwob School in 2018, the two formed this exciting new duo and are performing a diverse program which includes Rossini, Couperin, Gnattali, and Zohn.

American guitarist Andrew Zohn is recognized internationally for his work as a performer, instructor, and composer. Performing on five continents as a soloist and chamber musician, a recent critic has said: Zohn…easily demonstrated how he is one of the most sought after performers on the classical guitar as his fingers deftly plucked some of the most subtle of tones on the instrument.- (The Star, Kuala Lumpur).

Since 1999, Dr. Zohn has served on the faculty of the Schwob School of Music (Columbus State University) in Georgia, where he is the Jo and George Jeter Distinguished Chair in Guitar. A much sought after teacher, Zohn has been named to the faculty of the IV Máster en Interpretación de Guitarra Clásica at La Universidad Pablo de Olavide in Sevilla, Spain for 2018-19.  Those interested in summer study with Dr. Zohn can find him annually at the Texas Guitar Camp (Austin), the Candlewood Farm Arts Foundation’s Solstice Symposium Guitar Festival (Connecticut), the East Carolina Summer Guitar Workshop (Greenville), and the Borguitar Festival (Borgo Val di Taro, Italy).  In addition to these, he has been a guest artist in such distinguished events as the Festival of New Music (Central Conservatory of Music, China), Guitar Festivals Changsha and Shenyang (China), the Iserlohn Guitar Symposium (Germany), Camino Artes Festival (Spain), the Guitar Foundation of America (USA), Musica Ravenna (Italy), and GuitareMontreal (Canada).

Students of Andrew Zohn have won prizes in over 100 national and international competitions including The Parkening International, The Guitar Foundation of America, The World Guitar Competition (Serbia), and The Asia International (Bangkok).   Many of his students have been featured on the American National Public Radio program highlighting outstanding young musical talent From the Top.

A strong advocate for new music, Zohn has been responsible for commissioned works by, among others, Sergio Assad and Atanas Ourkouzounov.  In 2017, Zohn gave the world premiere of the commissioned work A Concerto of Colours by acclaimed British composer Stephen Goss.  Original compositions and transcriptions by Andrew Zohn are published through Les Productions d'Oz, Canada, Tuscany publications (Theodore Presser), and FJH Publications. Zohn’s latest solo recording, Eterna Saudade, will be released by Contrastes Records (Spain) in 2019.

Erdong Li has performed on the guitar throughout China and the United States, with the mission of promoting cultural exchange through musical celebration. Currently serving on the faculty of the Schwob School of Music (Columbus State University), Mr. Li also is vice-chairman of the Wenzhou Guitar Association (China). In his work as a cultural ambassador, Mr. Li is actively engaged in facilitating concerts that support the travel of classical musicians who seek performance opportunities in China, as well as those of Chinese musicians who seek performance opportunities in the United States. Mr. Li’s current projects involving international guitar festivals include the Columbus State University Guitar Symposium (USA), and the Altamira Guitar Festival in Wenzhou (China). As a performer, Mr. Li also tours throughout China annually as a part of W.E. Duo with violinist Weiru Sheng.

Mr. Li received his Master’s Degree at the Schwob School of Music at Columbus State University (GA). He holds a Bachelor’s Degree in classical guitar from the Central Conservatory of Music in Beijing; while there, he was also actively performing on electric guitar in a rock band throughout the region. This rich combination of influences from two cultures results in a truly special approach to music, one which includes a variety of styles ranging from acoustic folk to electric guitar, and which allows students to develop brilliant sound, solid musical skills, and abundant creativity.