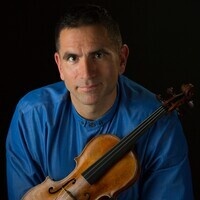 Since his solo debut with the legendary Philadelphia Orchestra at age nine, violinist Timothy Schwarz has been praised for his “energetic performances” (Rome News) and “technique beyond reproach” (Buffalo Times). Schwarz regularly performs throughout Europe, Asia, and the Americas as a soloist and chamber musician. His many CD’s include the 2018 release of Anthems from Prometheus(Albany Records) "All credit to Timothy Schwarz for providing a performance as gripping from first to last as this one" (Fanfare Magazine), the 2013 release of Early Chamber Works by Jennifer Higdon(Naxos) "Top 10 Classical Albums in 2013" (Philadelphia City Paper) and his 2006 release of Timothy Schwarz, Live! "Good enough to be the only recording in your collection" (American Record Guide).

An avid educator, Schwarz is currently Assistant Professor and Head of Strings at Rowan University, and Artistic director and founder of Techne Music, which includes a summer chamber music camp and concert series. For a five-year period through 2001, Schwarz served three tours as Artistic Ambassador in South America, Asia, and Africa, performing over 100 recitals in 15 countries. As part of winning the Starling Violin Competition, he studied with Dorothy DeLay at the Cincinnati College Conservatory of Music. He later received a MM from the Peabody Conservatory and a DMA from Temple University. His violin, purchased in 2014, is a J. B. Vuillaume made in 1830. For further information and a performance schedule, visit www.TimothySchwarz.com.