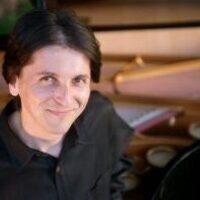 Award-winning jazz pianist-composer Tamir Hendelman has been leading his own trio and performing with the Jeff Hamilton Trio and the Clayton-Hamilton Jazz Orchestra since 2000-2001.  He is known for his imaginative and sensitive playing and arranging on recordings by Natalie Cole, Barbra Streisand and Roberta Gambarini as well as Graham Dechter, Richard Galliano and Claudio Roditi.

As a youth, he moved from Tel Aviv to Los Angeles, winning Yamaha’s national keyboard competition, performing in Japan and the Kennedy Center, attending Tanglewood in 1998 and receiving a Bachelor of Music Composition from the Eastman School of Music in 1993.

When Tamir premiered John Clayton’s version of Oscar Peterson’s Canadiana Suite in 2001, Mr. Peterson wrote: “It was a satisfying but strange feeling... to hear a new young voice make some exhilarating and thoughtful solos in the spaces I used to occupy in those pieces…”

Tamir’s latest CD, Destinations reached #1 in the US jazz charts.  The album takes listeners along on a voyage of musical discovery, from originals to Jobim, Keith Jarrett and Maurice Ravel.  “Destinations to me is about the journey of being a jazz musician.”