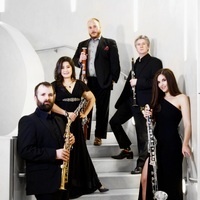 Paradise Winds, a Phoenix, AZ-based reed quintet, met while pursuing advanced degrees in music at Arizona State University and have been performing together since 2005. Paradise Winds appeared to over a million weekly listeners on American Public Media’s Performance Today in 2011 and 2013. In recent past, Paradise Winds was featured in the Phoenix-based award-winning Downtown Chamber Series, collaborated with the Grammy-winning Phoenix Chorale, and have appeared with Classical Revolution PHX.