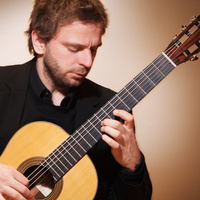 Hailed by Washington Post as “among the most gifted guitarists on the planet” Polish guitarist, Marcin Dylla is a rare phenomenon in the recent history of Classical Guitar. Many music critics, connoisseurs, and music lovers certify that Marcin Dylla is among the world's elite of classical guitar players. He has earned this position, among others, to the unparalleled number of awards including 19 First Prizes from 1996-2007 at the most prestigious international music competitions around the world. His last triumph was the Gold Medal of the '2007 Guitar Foundation of America International Competition' in Los Angeles known as the most prestigious guitar contest in the world followed by tour of over 50 cities in North America, Mexico and Canada during 2008-09 season .