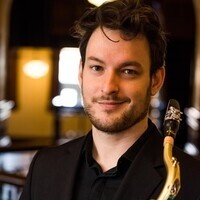 Alexander Richards is an active pedagogue and performing artist, having appeared in concert in Canada, the United States and Europe. As a concert saxophonist, Alexander has been a featured soloist with ensembles at the University of Victoria Wind Symphony (2011), the University of Minnesota Wind Ensemble (2013), and at the University of North Texas. In addition, Alexander has presented recitals at many prestigious festivals and conferences, including the Darmstadt Internationals Musikinstitut, the Texas Music Educators Association conference, and many North American Saxophone Association conferences. As a chamber musician, Alexander is a current member of the Texas based Mélange Saxophone quartet and has presented many recitals in this capacity across the state of Texas.

As a both a performer and pedagogue, Alexander devotes himself to the creation and dissemination of contemporary music for saxophone. He has both commissioned and premiered many works for saxophone in all capacities, from a double concerto with flute and orchestra, to chamber music, electroacoustic music, and unaccompanied works.  Currently, Alexander’s musical pursuit is the creation of new solo works for the sopranino saxophone. As a pedagogue, Alexander’s core belief is the incorporation contemporary technique and music into the canon. Currently, Alexander is an active teacher in the Dallas-Fort Worth metroplex, with a private studio of 60 students. In addition, Alexander has taught masterclasses at such prestigious institutions as the University of North Texas, Baylor University, Midwestern State University, and the Young Saxophonist’s Institute.
Alexander has been the recipient of the prestigious Berneking Memorial Fellowship and the Patsy C. and Fred W. Patterson College of Music Fellowship. Alexander has had the opportunity to study with many luminaries, including Dr. Eugene Rousseau, Dr. Eric Nestler and Wendell Clanton. Alexander holds a Bachelor of Music from the University of Victoria, a Master of Music from the University of Minnesota, and is currently in pursuit of his Doctor of Musical Arts at the University of North Texas.