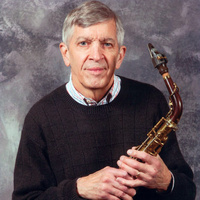 Jamey Aebersold is an American jazz saxophonist and music educator. His “Play-A-Long” series of instructional book and CD collections, using the chord-scale system, the first of which was released in 1967, are an internationally renowned resource for jazz education. As of 2013, 133 of these collections have been published by Aebersold, who taught musical improvisation at the University of Louisville for a number of years.

In 2009, he was initiated as a member of the Alpha Alpha national honorary chapter of Phi Mu Alpha Sinfonia, the oldest and largest music fraternity in the world, at its national convention in Orlando, Florida. At the same time, he was named the Fraternity's triennial recipient of the Charles E. Lutton Man of Music Award.

In July 2013, the National Endowment for the Arts included him for its 2014 Jazz Masters award, the nation's highest honor in jazz. Other recipients included Richard Davis, Keith Jarrett, and Anthony Braxton. Jamey Aebersold is the recipient of the 2014 A.B. Spellman NEA Jazz Masters Award for Jazz Advocacy, which is bestowed upon an individual who has contributed significantly to the appreciation, knowledge, and advancement of the art form of jazz. “Jamey Aebersold has made enormous contributions to the jazz world through his tireless efforts as a performer, educator, and publisher,” said 2000 NEA Jazz Master David Baker who was also on the faculty of the Summer Jazz Workshops, directed by Aebersold. “As the creator of the innovative and groundbreaking Jamey Aebersold Jazz Play-A-Long recordings series, as the longtime director of the Jamey Aebersold Summer Jazz Workshops, as an exceptional clinician and performer, and as the publisher of an extensive catalogue of jazz materials, Jamey has revolutionized the way people practice, teach, create, and perform their music.” Jamey has carried his message that “anyone can improvise” and that “creativity is part of the nature of every person' throughout the world to great success, impacting generations of both aspiring and established jazz performers and teachers.”