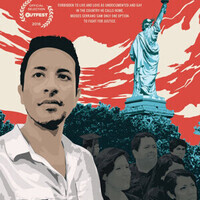 Presented as part of the 24th “Real Latin America” Film Festival and the The LGBT Center at University of Louisvilleas part of UofL Pride Week. In collaboration with the Department of Classical and Modern Languages, UofL Hispanic/Latino Initiatives, UofL Cultural Center, and the The Commonwealth Center for the Humanities and Society at UofL

STORYLINE
Two hot-button issues come together in Forbidden: Undocumented and Queer in Rural America. As Donald Trump rails against Mexican immigrants and LGBTQ community, we are introduced to Moises Serrano, who came to America from Mexico when he was 18 months old. Since he was not born in America, Moises is not a legal immigrant. We soon learn that Moises also happens to be gay, and in North Carolina, that presents another set of challenges.
Moises’ larger crusade as an activist is to expand the rights of undocumented people trying to survive in America. An urgent and necessary documentary, Forbidden humanizes the issues, proving eye-opening and inspiring to audiences.

Touching upon relevant issues such as DACA, the DREAM Act, and DOCA, Forbidden highlights the need for advocacy and awareness surrounding immigration reform and LGBTQ rights.