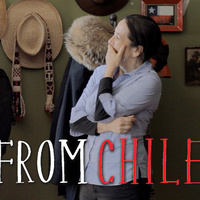 Film: I am From Chile

A coming of age story, I Am From Chile draws from the director’s personal experiences to tell a different kind of immigration story.
I Am from Chile is the story of Salvador, who moves to London from Chile to study English and travel around Europe at his parents’ expense. He stays with his aunt María (acclaimed Chilean actress Paulina García of Gloria, Illiterate), who makes a rather decent living renting the rooms of her house to other immigrants. But when a financial crisis back home leaves Salvador with no resources of his own, he has no other choice but to make ends meet with the help of María and his roommates (including a Russian drug dealer and his Japanese girlfriend), taking on a series of short-term, and at times, dangerous jobs. Difficult and challenging situations will force Salvador out of his protected bourgeois reality and into the real world. Synopsis Taken from the Pragda Film Festival site.

Get credentials to watch the film from the festival site:
http://medina502.com/reel_latinamerica_2020/credentials.php

A Q&A discussion session of this film will take place on Friday October30 at 6:30 p.m. via Zoom.

Free and Open to the public

Chilean Film, Latin American Film Festival, I am from Chile