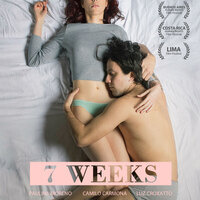 Camila is a young dance student. She has a committed boyfriend and supporting family, but when she discovers she is pregnant, all that love and encouragement become a burden. Her boyfriend is delighted and can’t wait to get married and start a family; while her family is already dreaming of nursery rooms. But has anybody asked her if she wants to become a mother? Camila will have to set other people’s expectations aside and make her own decision, no matter how difficult.

In her feature length directorial debut, young Chilean director Constanza Figari approaches one of the most controversial topics for women. Based on true events, 7 Weeks touches upon the politics of pro-choice and the rights to one’s body that still generate heated discussions. A necessary film to open the conversation on the topic in an intelligent manner.