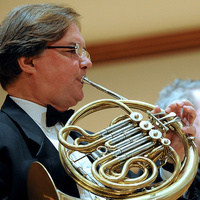 Bruce Heim is the Horn Professor at the University of Louisville and a member of Sonus Brass. Soon after graduation from The Juilliard School in 1974, he was appointed Principal Horn of the Oklahoma Symphony Orchestra. He has served on the faculties of Louisiana State University, University of Missouri, Oklahoma State University, University of Oklahoma, and the Sewanee ( Tennessee) Summer Music Festival. As a chamber musician, he has performed at music festivals in Italy, Germany, the Republic of China ( Taiwan), Venezuela, and many states of the U.S. Mr. Heim has frequently performed and recorded with the Saint Louis Symphony Orchestra, including their 1993 and 1998 European tours and numerous East Coast tours. He also occasionally performs with the Nashville Symphony Orchestra and the Alabama Symphony Orchestra. For the 2005/2006 season, he served as Acting Co-Principal Horn of the Louisville Orchestra.

He has performed as a concerto soloist and solo recitalist in many states of the United States and in Venezuela. He has appeared as a solo recitalist for the International Horn Society at regional and international workshops. His 2003 appearances as a soloist included the Brevard Music Festival (Britten Serenade), and Utah State University (Strauss Concerto No. 1). In November 1997, Mr. Heim was invited to be the featured artist at the 1997 International Horn Festival of Mérida ( Venezuela). He performed the Haydn Horn Concerto No. 1 with the Mérida Symphony Orchestra and presented master classes and recitals. Heim returned to Venezuela in 1988, 2001 and 2003 with the brass quintet, Sonus Brass.

As a member of Sonus Brass, he has performed extensively throughout the United States, the Far East, and South America. Their first compact disc, "Captured: Sonus Brass!" was released to unanimous critical praise by the five major brass magazines and the American Record Guide. Sonus Brass has been a featured ensemble at International Trumpet Guild (1999, 2001) and International Tuba and Euphonium Association (formerly T.U.B.A., 1992) conferences.

In addition to teaching the horn students at the UofL, he directs the UofL Horn Ensemble, coaches chamber music, performs regularly with the faculty wind and brass quintets, and teaches music theory. Heim maintains an active schedule of private teaching and fulfills invitations as a concerto soloist, clinician and adjudicator. In 2001 and 2004, he was the horn clinician for the American Band College in Ashland, OR.

Professor Heim has a graduate degree in music theory from the University of Tulsa. An interest in the study of musical intonation and tuning systems formed the basis of the topic for his master’s thesis. This document continues to be circulated among instrumentalists and conductors who share a curiosity about the intricacies of the subject of intonation and how to teach it more effectively.