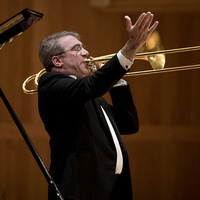 In March 2004, Dr. Shuster was the featured soloist with the United States Army Orchestra at the Eastern Trombone Workshop. He also presented the first complete performance of Norman Bolter’s Mountains, Lakes, and Trees with the Orquestra Sinfonica da USC on alto, tenor and bass trombone, respectfully. During the 2007-2008 season Shuster was the interim principal trombonist of the Louisville Orchestra. He is also active as a sackbut soloist and performs regularly with Kentucky Baroque Trumpets and Bourbon Baroque. Shuster performed as a featured soloist at the International Trombone Festival in 2011 and 2013.

Professor Shuster’s educational background includes a B.M. from the New England Conservatory of Music, an M.M. from Northwestern University, and a D.M.A. from Arizona State University. Over the past 35 years, Shuster has studied with many of the finest brass teachers including George Sanders, David Mathie, Norman Bolter, John Swallow, Frank Crisafulli and Gail Eugene Wilson.