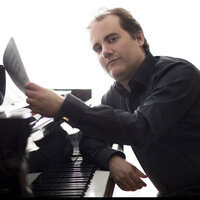 He has recorded the complete works for piano of George Enescu for the NAXOS Grand Piano label and Les Noces by Stravinsky, also for the same label, with Joann Falletta as conductor.

Josu De Solaun is a graduate of the Manhattan School of Music, where his two main teachers and main musical influences have been pianists Nina Svetlanova and Horacio Gutierrez.