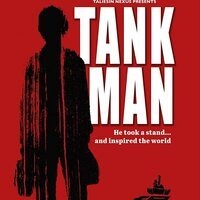 Join us as we screen two critically-acclaimed and multi-award-winning short films, followed by discussion with the movies' producers. Tank Man tells the story of one brave individual who stood up to one of the world's most powerful governments in Beijing's Tiananmen Square in 1989.  In Empty Skies, a boy and his friend hunt their village's last sparrow for a reward to save his sick Grandma during Communist China's Great Leap Forward (1958-1961).

After the showings, producers Robert Anthony Peters and Patrick Reasonover will discuss the importance of these films and the spotlight they shine on the catastrophic consequences of total government control.

This event is part of the Menard Family Lecture Series and is presented by the Center for Free Enterprise in the College of Business. Free pizza will be served.

A member of SAG-AFTRA, Robert Anthony Peters has been acting, producing, directing, and writing professionally in theatre, film, and voiceover for more than a decade. His most recognizable film acting roles are in The Pursuit of Happyness and Steve Jobs.

He writes and lectures internationally on the relationships between art, law, philosophy, and economics. He records audiobooks, is a policy advisor for the Heartland Institute, was an inaugural member of the FEE Alumni Board, and is vice chair of the board of the Fully Informed Jury Association. Robert completed  his BS in marketing and entrepreneurship at the University of Arizona, was a Charles Koch Summer Fellow in DC, and trained at the Lee Strasberg Theatre Institute in NYC.

Patrick Reasonover is a writer/producer at Just Add Firewater. He is in production on his third feature documentary (previous two being Of Dogs and Men and They Say it Can't Be Done). He has produced more than 70 short films, narrative, and documentary, which took him to Costa Rica and Serbia, and this spring will find him in Uruguay and Nepal. He also co-created and directed the animated comedy web series PIGTV, based on the NY Times bestselling Politically Incorrect Guides and stars Michael Malice and Tom Woods. Currently Patrick is working on a serial comedy audio novel, Rednecks vs. Aliens.