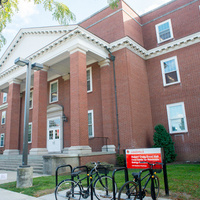 CW-EPR and pulsed EPR spectroscopic techniques such as Double Electron-Electron Resonance (DEER) coupled with site-directed spin-labeling (SDSL) can provide important structural and dynamic information on complicated biological systems such as membrane proteins.  These powerful techniques will be used to investigate the KCNQ1/E1 K+ channel and the pinholin membrane protein complex.

KCNQ1, also known as Kv7.1, is a voltage gated potassium channel that associates with the KCNE protein family. Mutations in this protein has been found to cause a variety of diseases including Long QT syndrome, a type of cardiac arrythmia where the QT interval observed on an electrocardiogram is longer than normal.  This condition is often aggravated during strenuous exercise and can cause fainting spells or sudden death. KCNE1 is an ancillary protein that interacts with KCNQ1 in the membrane at a 4:2 Q1:E1 molar ratio. This interaction allows for the flow of potassium ions to be modulated in order to facilitate repolarization of the heart.

The final step of the bacteriophage infection cycle is cell death through lysis of the host cell membrane. The holin protein accumulates in the inner cell membrane during viral replication until an allele specific time, when holin is “triggered”, eventually causing holes to form in the membrane.  The holin system studied in this work has 2 transmembrane domains (TMD 1 and TMD2) and is called “pinholin”. The term pinholin comes from the small holes formed in the host cell membrane upon oligomerization at higher protein concentrations. These pinholes cause a loss of the proton motive force across the membrane which releases the signal-anchor-release (SAR) endolysin from the membrane, a protein responsible for the degradation of the peptidoglycan layer.Pinholin is expressed in two different functional forms due to the presence of a dual start motif. This results in an active form of the pinholin containing 68 amino acids, which functionalizes rapidly, and an inhibitory or inactive form containing three additional amino acids (MKD) on the N-terminus, which takes longer to reach its full functional form.

CW-EPR and DEER data will reveal differences in the dynamics, topology and structural conformations of the active and inactive forms of pinholin with respect to the membrane.  Similar results will be discussed for the KCNQ1/E1 K+ channel.

Dr. Gary Lorigan is currently the University Distinguished Professor in the Department of Chemistry and Biochemistry at Miami University in Oxford Ohio. At his time at Miami from 1998 he has held a number of impressive positions, including the Volwiler Distinguished Research Professor, Director of the Ohio Advanced EPR Lab, and the John W. Steube Professor. His undergraduate degree was in chemistry from California State. He received his PhD from the University of California at Davis in 1996 and was a NIH Postdoctoral Fellow at the University of Pennsylvania form 1996-98.  His research focuses on the application of magnetic resonance spectroscopy to the study of membrane proteins in lipid membrane environments.