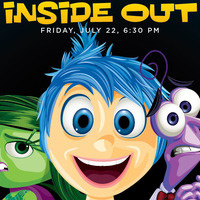 Cards Under the Stars - Inside Out

“Inside Out” is the final film in this summer’s Cards Under the Stars movie series.

The free, outdoor event kicks off at 6:30 p.m. on the lawn between the Natural Sciences Building and Grawemeyer Hall. The film begins at sunset.

Cards Under the Stars begins May 20 with “Star Wars: The Force Awakens” and June 24 with “Zootopia.”

Film Synopsis: Emotions run wild in the mind of a little girl who is uprooted from her peaceful life in the Midwest and forced to move to San Francisco in this Pixar adventure from director Pete Docter (Up, Monsters Inc.). Young Riley was perfectly content with her life when her father landed a new job in San Francisco, and the family moved across the country. Now, as Riley prepares to navigate a new city and attend a new school, her emotional headquarters becomes a hot bed of activity. As Joy (voice of Amy Poehler) attempts to keep Riley feeling happy and positive about the move, other emotions like Fear (voice of Bill Hader), Anger (voice of Lewis Black), Disgust (voice of Mindy Kaling) and Sadness (Phyllis Smith) make the transition a bit more complicated. Author: Jason Buchanan