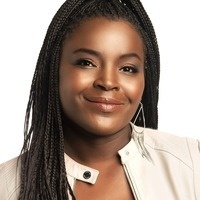 Better Lives Through Business: A Conversation with Entrepreneur Magatte Wade

Magatte Wade is passionate about creating jobs and prosperity for the people of Africa through entrepreneurship, and has started businesses based on African traditions. She is the founder and CEO of SkinIsSkin, a high-end skin care line based on indigenous Senegalese recipes and ingredients. The products are distributed through skinisskin.com, as well as through select boutiques and Nordstron. The company commits at least 10 percent of profits to the creation of entrepreneurial schools in Senegal designed to develop the next generation of Senegalese genius.

Magatte was born in Senegal, educated in France, and launched her entrepreneurial career in San Francisco. She is fluent in, and conducts business in Wolof, French, and English.

She writes for The Guardian. Huffington Post, and Barron's. She was named a Young Global Leader by the Davos Global Economic Forum, as well as one of the "20 Youngest  Power Women in Africa" by Forbes in 2011. In 2014 she was featured on the cover of Forbes Afrique for being the person in Francophone Africa having the greatest positive impact on the future. She also received the award for the “Leading Woman in Wellness” from the Global SPA and Wellness Summit.  She serves on the board of ASNAPP and the SEED Academy (Sports for Education and Economic Development), a private school in Senegal that prepares young people academically and athletically so that they can win NCAA basketball scholarships in the U.S. She also serves on the Advisory Board of the Whole Planet Foundation, the private foundation of Whole Foods Market.

This event is part of the Menard Family Lecture Series, as well at the BB&T Speaker Series. It is free and open to all. Pizza will be served.