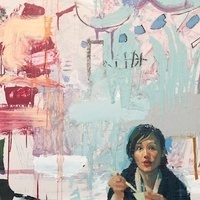 Benjamin Duke: It wasn't a Dream, It was a Real Place

Dorothy wakes up after a nasty bump on the head. She finds herself once again in a familiar place, comforted by loved ones. No need to fear, Dorothy, Oz was all just a dream. “But it wasn’t a dream,” she insists, “It was a real place.” We believe her. It was more real, at least, than the sepia-toned Kansas room to which she wakes.

“It Wasn’t A Dream..,” a solo exhibition of work by Benjamin Duke, explores the relationship between illusion and reality. Duke was the inaugural participant in Louisville Metro Government’s Visiting Artist Series in 2015. For Duke, art is always about illusionism—about creating a fictional space out of color, form, and texture. But such illusionism is also how we understand the real world. Our bodies are complex sensory organs feeding our minds an endless supply of perceptual data. We make sense of it by cobbling together pictures of the world around us. These pictures, like artworks, are merely illusions: strange and confusing and false, but also often beautiful.

Bodies appear in many of Duke’s paintings, and indeed, the work itself is also bodily. Fleshy tones and chunky, gestural brushwork give the art a corporal presence. Human-scale canvases impose on the space like bodies in a crowded room. Likewise, Duke’s paintings are often crowded. The illusory spaces he constructs are filled with bewildered and over-stimulated figures. To view this work is to step into these spaces—and to acknowledge, simultaneously, that the world you left behind is just as dreamlike; filled with bewildering sensations and bewildered sensing bodies too.

Benjamin Duke is Associate Professor of painting at Michigan State University. Born in Louisville, Kentucky, he received his Master of Fine Arts from the Maryland Institute College of Art Hoffberger School of Painting. His work has been exhibited in solo and group exhibitions from Chicago to Taiwan. He was Louisville’s first participant in a visiting artist initiative introduced in 2015 as part of the Mayor’s Music & Art Series, for which he produced the largescale painting Louisville 2015: Full of Life, Now (2015) on view at Metro Hall. Duke lives and works in Michigan.