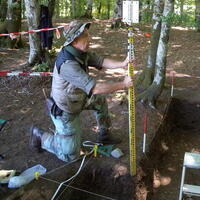 Guarding the Borderlands, a public lecture and exhibition sponsored by the Archaeological Institute of America, highlights the results of recent archaeological investigations conducted in the territory of ancient Locri Epizephyrii, one of the main Greek cities in southern Italy’s Calabria region.  In the 6th century BCE, a time of intermittent conflict among the leading Greek city-states in this region, the Locrians built permanent fortifications on their mountainous borderlands. As the largest Locrian mountain fort identified so far, the settlement at contrada Bregatorto played a critical role in Locri’s territorial defense network.  Located on a high ridge marking the western boundary of Locri’s territory, at 14 km from the city, it was a control point on the most direct route from the eastern to the western coast of Italy. A geophysical survey and test excavations by a team from the University of Kentucky, Langara College (Vancouver, B.C., Canada) and the Foundation for Calabrian Archaeology, have yielded information on the fort’s layout and occupational history. The ceramic evidence and radiometric data indicate that the fort was constructed c. 500 BCE and may have been used until the end of the 3rd century BCE.  The site was also visited in the 2nd and 1st centuries BCE, but was not reoccupied afterwards.

Paolo Visonà is a classical archaeologist and field director of the Dig Calabria project.

Guarding the Borderlands is part of an ongoing series of archaeology lectures presented by the Kentucky chapter of the Archaeological Institute of America, in collaboration with the University of Louisville departments of Anthropology and History. For more information about the series, visit http://www.kyarchaeology.com/.