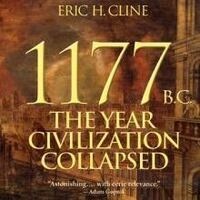 Archaeologist Eric H. Cline on "1177 BC: The Year Civilization Collapsed"

What combination of factors led to the collapse of Bronze Age civilizations in the Mediterranean world? Archaeologist Eric Cline explores this question in a free public talk, "1177 BC: The Year Civilization Collapsed."

For more than three hundred years during the Late Bronze Age, from about 1500 BC to 1200 BC, the Mediterranean region played host to a complex international world in which Egyptians, Mycenaeans, Minoans, Hittites, Assyrians, Babylonians, Cypriots, and Canaanites all interacted, creating a cosmopolitan and globalized world-system such as has only rarely been seen before the current day. It may have been this very internationalism that contributed to the apocalyptic disaster that ended the Bronze Age. When the end came, as it did after centuries of cultural and technological evolution, the civilized and international world of the Mediterranean regions came to a dramatic halt in a vast area stretching from Greece and Italy in the west to Egypt, Canaan, and Mesopotamia in the east. Large empires and small kingdoms, that had taken centuries to evolve, collapsed rapidly. With their end came the world’s first recorded Dark Ages. It was not until centuries later that a new cultural renaissance emerged in Greece and the other affected areas, setting the stage for the evolution of Western society as we know it today.

Blame for the end of the Late Bronze Age is usually laid squarely at the feet of the so-called Sea Peoples, known to us from the records of the Egyptian pharaohs Merneptah and Ramses III. However, as was the case with the fall of the Roman Empire, the end of the Bronze Age empires in this region was probably not the result of a single invasion, but rather of multiple causes. The Sea Peoples may well have been responsible for some of the destruction that occurred at the end of the Late Bronze Age, but it is much more likely that a concatenation of events, both human and natural — including earthquake storms, droughts, rebellions, and systems collapse — coalesced to create a “perfect storm” that brought the age to an end. In this illustrated lecture, based on his book of the same title (1177 BC: The Year Civilization Collapsed; Princeton University Press, 2014) that was considered for a 2015 Pulitzer Prize, awarded the American School of Oriental Research’s 2014 prize for “Best Popular Book on Archaeology,” and is being translated into fourteen foreign languages, Professor Eric H. Cline of The George Washington University will explore why the Bronze Age came to an end and whether the collapse of those ancient civilizations might hold some warnings for our current society.

The Norton Lecture is named for Charles Eliot Norton, Professor of the History of Art at Harvard University and one of the founders of the Archaeological Institute of America, as well as its first president. The Norton Lectureship is one of the highest honors that the AIA can bestow, and has been held by a series of distinguished scholars since its inception in 1907.

"The Year Civilization Collapsed" is part of an ongoing series of Lectures in Archaeology presented by the Kentucky Society of the Archaeological Institute of America, in collaboration with the University of Louisville Departments of History and Anthropology. More information about the series is available at http://www.kyarchaeology.com.