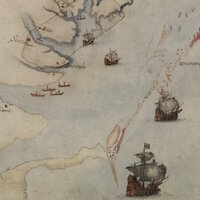 What can archaeology tell us about early British colonization in Ireland and North America? Archaeologist Audrey Horning of the College of William & Mary and Queen's University, Belfast, tackles this question in her talk, "Worlds in Motion: Ireland, the Atlantic, and Early Colonial America."

Early British colonial settlements in Ireland and North America occupied a parallel and overlapping universe, so intimately connected that in the early seventeenth century, the chronicler Fynes Moryson would refer to Ireland as “this famous Island in the Virginian Sea”.  In her lecture Worlds in Motion: Ireland, the Atlantic, and early colonial America, Dr. Audrey Horning will draw from a range of archaeological projects in both North America and Ireland, and consider the similarities and dissimilarities between the two lands and the cultural entanglements of the early modern Atlantic. Familiar places like Roanoke, Jamestown, and Plymouth will be discussed in light of their lesser known Irish connections, while the long held notion that Ireland served as a model for New World English colonial ventures will be challenged.​

Audrey Horning is the Arts and Sciences Distinguished Professor of Anthropology at the College of William and Mary, and Professor of Anthropology at Queen's University, Belfast.  She holds degrees from the University of Pennsylvania (Ph.D.) and the College of William and Mary, and her areas of specialization are comparative colonialism, historical archaeology, Ireland and eastern North America, and the archaeology of conflict transformation.  She has done extensive fieldwork in Ireland, as well as in North America (Virginia) and the Western Isles of Scotland.

Worlds in Motion is part of an ongoing series of Lectures in Archaeology presented by the Kentucky Society of the Archaeological Institute of America in collaboration with the University of Louisville Departments of History and Anthropology. More information about the series is available at: http://www.kyarchaeology.com.