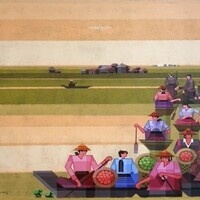 Altered State: Painting Myanmar in a Time of Transition

The UofL Center for Asian Democracy and the Louisville Free Public Library are excited to partner to present an exhibit of paintings from contemporary Burmese artists.

The word “thukhuma,” meaning art or culture, is from Pali, the sacred language of Myanmar’s dominant Theravada Buddhist tradition. This collection of paintings, known collectively as Thukhuma, presents a selection of the work of contemporary artists living and working in Myanmar that highlight different perspectives of a society in transition. The paintings are from contemporary Burmese painters who themselves are part of a wider public forum that actively loans or even donates the paintings to public institutions. While we should feel revulsion at the acts of the military and extremists against the Rohingya, we should not paint all Burmese as intolerant nationalists and instead recall the words of the German philosopher Friedrich Schiller that “art is the daughter of freedom.”

For decades Myanmar (also known as Burma) was a country closed off from the world. Little was heard about it and few people visited it. When it did make the news it was often for all the wrong reasons, usually for its brutal military government using force against its own people to silence any voices of dissent. In the last five years, much of that began to change. The country finally began to open up both literally and figuratively. Greater numbers of tourists have begun to explore the coun-try’s rich natural and man-made heritage, while significant progress has been made in economic and political reforms. There is still a long way to go. The military continues to play a significant role in the country’s politics and the rise of virulent Burmese nationalism has led to a shocking campaign of eth-nic cleansing against the country’s Muslim minority (known as the Rohingya) in the West of Myan-mar. The latter tragedy reminds us that the journey from authoritarianism to democracy is one that is rarely smooth and that freedom of speech in a society where such freedoms were repressed can give rise to extremism as easily as it can to voices of toleration and harmony.

Burma is a spectacularly diverse country, a kaleidoscope of over 135 ethnic groups including the dominant Burmese, the Chin, Kachin, Karen, Karenni, Mon, Rakhine, Rohingya and Shan to name just a few. Between them, these groups speak over 100 distinct languages. Similarly, while the country is overwhelmingly Buddhist there are distinct Christian, Muslim and Hindu minorities. Burmese Bud-dhists are from the Theravada school of Buddhism found in India, Sri Lanka, as well as Burma’s neighbors, Cambodia, Laos and Thailand and among the country’s most dramatic tourist attractions are the more than 10,000 Buddhist temples and pagodas found in the Bagan plains, a site made more dramatic by the fact it is largely deserted today. However, Burma is not a museum frozen in time. In the country’s thriving cities of Yangon and Mandalay you will see evidence of the dramatic economic transformation of the country everywhere. Amidst the traditional teahouses where locals gather to discuss daily life, gleaming new Starbucks-style coffee shops are springing up with the global giant itself set to open in the country shortly.