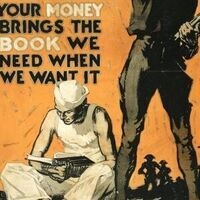 'All In!’ Louisville and the Great War

When the United States entered World War I, the people of Louisville were eager to play their part. Whether serving overseas, working at Camp Taylor, or conserving food for the war effort, Louisvillians were ‘all in.’

One hundred years later Archives and Special Collections recognizes their work with “‘All In!’ Louisville and the Great War,” an exhibition of vintage photographs, war posters, documents and artifacts from its collections.