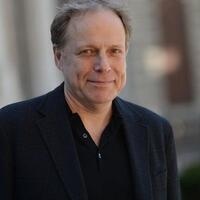 Shakespeare has played a surprisingly significant role in American literary and political life since the time of the Revolution.  In plays and poems, essays and parodies, short stories and reviews, American writers for over two centuries have turned to Shakespeare, time and again, to engage the issues that have defined and divided us as a nation.  Drawing upon his anthology for the Library of America — Shakespeare in America— James Shapiro considers in this talk the alternative history of our nation conveyed in these works, in a series of case studies of American writers from across the land, and across social, ethnic, and political divides.

James Shapiro studied at Columbia University and the University of Chicago. He is currently Larry Miller Professor of English and Comparative Literature at Columbia University.  His numerous publications include Rival Playwrights: Marlowe, Jonson, Shakespeare; Shakespeare and the Jews; Oberammergau: The Troubling Story of the World’s Most Famous Passion Play; 1599: A Year in the Life of William Shakespeare; Contested Will; and most recently The Year of Lear: Shakespeare in 1606. His 3-hour documentary The King and the Playwright aired on BBC4 in 2012 and The Mysterious Mr. Webster on BBC2 in 2014.  He is widely published in top publications, including the New York Times, the Guardian, the London Review of Books and many more.  He has been awarded fellowships from the National Endowment for the Humanities, the Guggenheim Foundation, and The New York Public Library Cullman Center for Scholars and Writers. He serves on the Board of Governors of the Folger Shakespeare Library as well as the Board of Directors of the Royal Shakespeare Company. He is currently the Shakespeare Scholar in Residence at the Public Theater in New York City. He is also a Vice President of the Authors Guild. In 2011 James Shapiro was inducted into the American Academy of Arts and Sciences.

“Shakespeare in America” is presented as part of UofL’s sponsorship of Will In the Ville.  Find out more about this collaborative commemoration of the 400th anniversary of William Shakespeare’s death at www.LFPL.org/WillintheVille including information about The First Folio, arriving in Louisville in November 2016.

Shakespeare, Theatre, Will in the Ville, First Folio